This month's edition of Plane and Pilot magazine contains an excellent article on the best Multi-engine trainer in the business, the Piper Seminole. The article highlights the history of the Seminole as well as its value to the Flight-training Industry. Since ATP has the largest fleet of Seminoles in the world, the article talks about ATP and its use of the Seminole and I would like to share part of it with you: 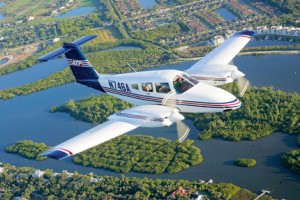 One of the largest schools in the business of turning out future airline pilots is ATP Flight School. The initials stand for Airline Transport Professionals, and the school was organized in 1984 by a group of airline pilots focused on efficient military-to-civilian Airline Transport Pilot certification programs. ATP teaches both domestic and international candidates, some in advanced ratings and others from ab-initio status to nearly full airline credentials. The school's trainers include everything from Archers and Skyhawks for entry-level instruction to a Meridian and Citation jet for pilots transitioning to turbine equipment. In total, ATP has some 225 airplanes strategically located across the USA. Major ATP training facilities are located in Phoenix, Dallas, Atlanta and Jacksonville, with outlying schools in locations such as Chicago, Denver, Seattle, San Diego, Las Vegas and two dozen other sites. Most significantly, ATP's trainers include over 100 Piper Seminoles, the world's largest fleet of multi-engine teaching machines. Half those aircraft are post-2000 models, and all are fitted with a full panel of Garmin IFR avionics, many with the Garmin G500 flat-panel display. ATP's success isn't surprising considering the rewards of airline flying. The U.S. Bureau of Labor Statistics estimates the average airline pilot makes about $92,000 a year, though starting pay is much lower. If a pilot stays with the industry for 20-25 years, they can earn an annual salary of as much as $150,000, have as much as 15-17 days off each month and fly about 900 hours a year. Fortunately for those with the talent and wherewithal to ascend the ladder to the ultimate left seat, the opportunities are impressive. The University of North Dakota, one of the colleges most active in training pilots, estimates the industry will need 69,000 new pilots by 2035. With such a huge fleet in so many locations, the flight school issues some 4,300 licenses and ratings a year. ATP also has a course to prepare pilots for the ATP written test. ATP Flight School has an agreement with Republic Airlines in which students interview with Republic during the instrument phase of training and receive conditional offers of employment. Students will need to build time to 1,500 hours and pass the FAA's Airline Transport Pilot checkride, but after that, they have a firm first officer job offer. Depending upon whom you ask, flying for the airlines can be one of the best jobs in the sky. With the benefit of professional training by a school such as ATP, a new pilot is well prepared to take on the challenges of scheduled airline flying, both in the U.S. and overseas.