At a flight school with the name of ATP you would expect to find a lot of airline pilots and there are a lot of them here. Airline pilots past, present and future are all here working hard to send new pilots to the airline industry. One of the great pleasures of working here is watching students successfully become pilots and go on to fly for the airlines. One of those success stories is Chris Carey, who began flight training in the Airline Career Pilot Program at ATP in 2003 and is now a Captain flying the Airbus A320 for a major airline. Chris is also working to bring new talent into the airline industry by mentoring people interested in flying for the airlines at www.airlinepilot.life. Chris shares the story of Jordan Lascomb who is taking a similar journey. 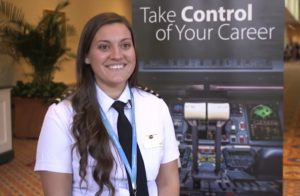 Through the course of mentoring new pilots on www.airlinepilot.life I get to talk with people in all phases of their pilot careers, from those who are just beginning to research the profession to seasoned aviators that join in on the discussion. One pilot that has chosen to contribute to the forum is Jordan Lascomb, a First Officer for SkyWest. I asked Jordan to share her path to being a pilot and what has made her so successful. From Jordan: I suppose you could say that I had a pretty non-standard entrance to aviation. I didn’t grow up with any family members involved in the field and I had almost no exposure to flying – that is, until I joined the University of Florida skydiving club. So yes, my first love will always be jumping out of airplanes, a piece of information I tend to keep out of my passenger briefings. I graduated from college with my bachelor’s degree in 2012, with plans to go into forensic anthropology. I tried a nine to five job, but my head was always in the clouds. I began to do some research and signed myself up for an introductory flight at a local flight school as I obviously had experience in small aircraft, but never at the controls of one. This flight changed everything for me and I threw myself into researching the best path toward my new dream of becoming a professional pilot. After extensive research, I found that ATP provided exactly what I wanted: an accelerated program with a fixed cost that would train me to airline standards. I started my flight training on March 4, 2013 in Jacksonville, Florida. I passed each of my checkrides on the first attempt in just over five months and then decided to stay with the company as an instructor at the Phoenix location. To this day, I still consider my time instructing at ATP to be some of the most valuable flight time in my logbook. 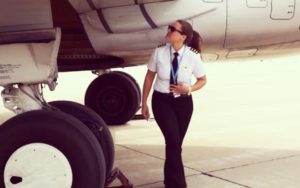 While flight instructing, I joined the SkyWest Pilot Pathway Program as a cadet and eight months later, received a job offer from SkyWest for a class date on the Embraer 175. On March 4, 2015, exactly two years to the day that I began flight training, I had my last flight as an ATP instructor before heading off to join SkyWest as a First Officer. Once in training at SkyWest, I felt completely prepared for the pace of learning expected from me in the 121 environment, thanks to my time at ATP. SkyWest’s flight training program is the best in the business, and I was very comfortable in a commercial setting by the time I was flying the line. I was awarded Chicago O’Hare, and today SkyWest has eighteen domiciles across the country. In March of 2016, I was selected for the SkyWest recruiting and interviewing team. In addition to being a recruiter, I also get to mentor SkyWest cadets, which has been an awesome way to see things come full circle and help other aspiring pilots. In my short time at SkyWest, I’ve had amazing opportunities. I was selected for the E175 delivery team, which means I get to go to the Embraer’s manufacturing facility in Brazil, pick up our brand new aircraft, and fly it back to our maintenance facility in the United States. To date, I have delivered six aircraft for the company, with the seventh coming in just a few weeks. Shortly after that, I will be upgrading to Captain on the E175. 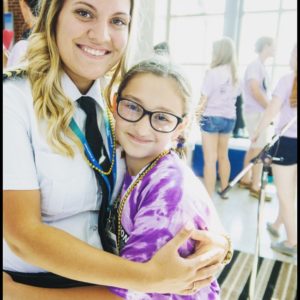 As I approach the five-year mark from the start of my aviation journey at ATP, I cannot help but look back and be grateful for all of the amazing opportunities I have had. With over 37 years left in this career, I can’t wait to see what lies ahead! Career minded people are reacting to the opportunities in the airline industry and choosing flying for a living over more commonplace careers. The most successful of these people are choosing the best source of career oriented flight training available and training with ATP, where they can complete training and join the airlines in just two years. Train with the leader in sending new pilots to the airlines: ATP.
Pilot Career Guide » Download Your FREE Pilot Career Guide »